Our client had bought a terrace of three houses, which he has been refurbishing to a high standard.  The end of terrace house included a large side garden with a long street frontage and ramshackle garage with loft office above.

Our brief was to design a new modern house on the site of the derelict garage and garden behind.  The site lies within the historic centre of Wingham within the Wingham Conservation Area and the adjoining building is a 19th century grade 2 listed building.  The land rises quite steeply to the rear of the site and access onto the road is currently awkward with poor sight lines.

The new house was conceived as having a ‘front wall’ of rendered masonry, detailed in a simple stripped down Georgian manner, behind which would lie a lightweight building clad in plain clay tile hanging.  The detailing for the ‘front wall’ would include carefully proportioned fenestration arranged symmetrically on the elevation with deep reveals, reconstituted stone cills and copings, again proportioned along traditional lines and window reveals etc. would be formed in the traditional way rather than using metal or plastic angle beads.  Both proportions and details would reflect Georgian preoccupations rather than contemporary norms.  By contrast the rear and flank elevations would be unabashedly modern in concept and detail with powder-coated aluminium casement windows and sliding doors.  Finally, the roof would be flat and clad in zinc reflecting the Georgian preoccupation with apparently flat roofs interpreted in a modern way. 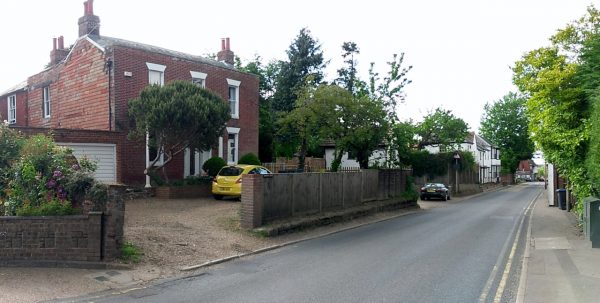